Celeste Roberge was born in Biddeford, Maine. She maintains a studio in South Portland.  She is Professor Emerita, University of Florida where she was Professor of Sculpture in the School of Art + Art History and Head of the Sculpture Area for twenty-two years. She received a MFA degree from the Nova Scotia College of Art and Design, BFA from the Maine College of Art, and BA in Sociology from the University of Maine. She attended the Skowhegan School of Painting and Sculpture in 1979. In 2008, she was awarded an Honorary Doctorate of Humane Letters from the University of Maine.

Celeste Roberge has received numerous awards and fellowships. In June 2019, Celeste participated in an 18 day residency on board the Antigua with The Arctic Circle on an expedition along the west coast of Svalbard, Norway. In Nov/Dec 2018, Celeste was an artist-in-residence at Monson Arts in Monson, Maine working on drawings, photos, and collages inspired by the slate quarries of Monson. In 2013 she was an artist-in-residence at the Arts/Industry Program at Kohler, Inc. in Wisconsin. In summers 2010, 2011 and 2017, she continued her current research into seaweed as a resident artist at the Baie Ste. Marie-Jenny Family Compound in New Edinburgh, Nova Scotia sponsored by the Maine College of Art. In 2008, she held the William Randolph Hearst Fellowship for Creative and Performing Artists at the American Antiquarian Society in Worcester, Massachusetts where she conceptualized the Granite Sofa project. She was a resident artist at SIM in Reykjavik, Iceland in 2007.  She has received two Pollock-Krasner Foundation Grants and a MacDowell Colony Fellowship. She was awarded a Research Foundation Professorship by the University of Florida from 2004-2007.  She is the recipient of two Florida Individual Artists Fellowships.  She was a Fellow in 1988/89 at the Radcliffe Institute for Advanced Study at Harvard University. In 1979 she received the first Bernard Langlais Fellowship to attend the Skowhegan School of Painting and Sculpture. During her tenure at the University of Florida, she received generous support and numerous research grants from the College of the Arts.

The chair is a simple object with a complex story. A chair in academia denotes a position of authority or an honor. The chair can be both the person and the office.  As a functional object, the chair is an aid to human work and a place of rest after work. A chair is an architectural and technological object. When viewed from the back, Chair for Mining Chromium looks more like a modernist high rise building than a chair. In this sculpture, the proportions of the chair make it into a throne and, thereby,  an homage to an unsung material aspect of life.

Chair for Mining Chromium is made of high quality brushed stainless steel. Metals are mined. Mines are dirty, simultaneously productive and destructive. Processing metal ore is filthy, leaving behind unwanted byproducts. Even after a metal is in a refined state, fabricating with metal is sooty, unhealthy, and unpredictable. The product of all this dirt is a material that has unique properties of beauty, meaning, and function. The weight, materiality, reflectivity, warmth, coldness, flexibility, strength, hardness, and conductivity of metals are often apparent in the appearance of metals. The social and economic functions as well as the geological and geographical origins of metals traverse the globe. Chair for Mining Chromium conflates a transitory functional form with the permanence of materials, and that fusion creates a duration that reaches back and forward into the history of things.

The Miniature Stacks relate to geology in the sense of going deep down and through the sedimentary layers that make up the earth and in the sense of rising up like an extrusion or eruption from the earth as occurs with the formation of basalt columns, volcanoes, and mountains.

The Miniature Stacks are core samples built of layers of materials that relate to the history of modernist art.  The layers repeat themselves over and over until, suddenly, they stop and a chair emerges that is itself also made up of multiple layers of materials, a Borgesian object.

The Miniature Stacks are small poems compared to the monumental architectural and funerary references of my large Stacks sculptures.  Some Miniatures are made in homage to specific modernist sculptors, signifying the possibility that this practice of stacking could go on and on until all of modernism has been subsumed in its miniature history of sculpture. Where the large Stacks are meant to be utterly material and extremely dense, the Miniature Stacks are more elusive, almost invisible, precariously vertical, humorous, barely stating anything, except a question. 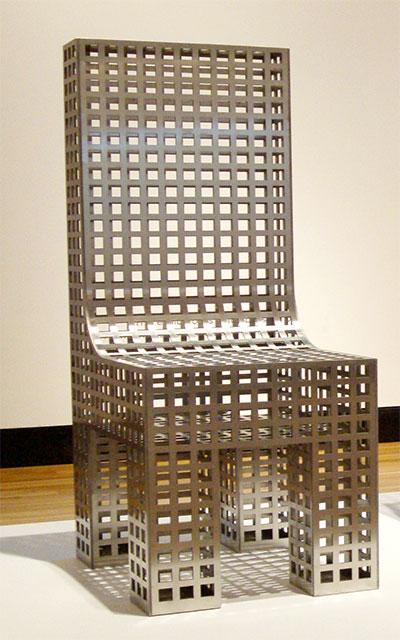 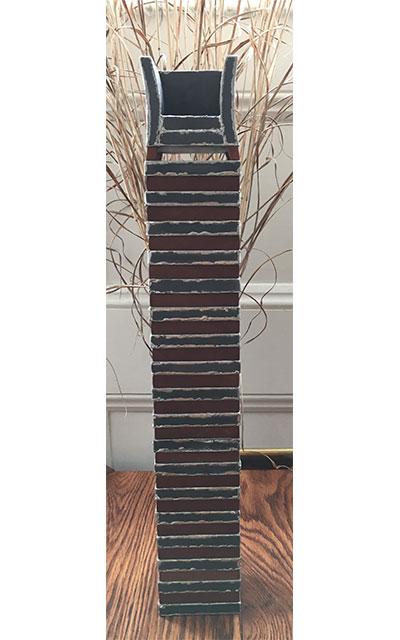 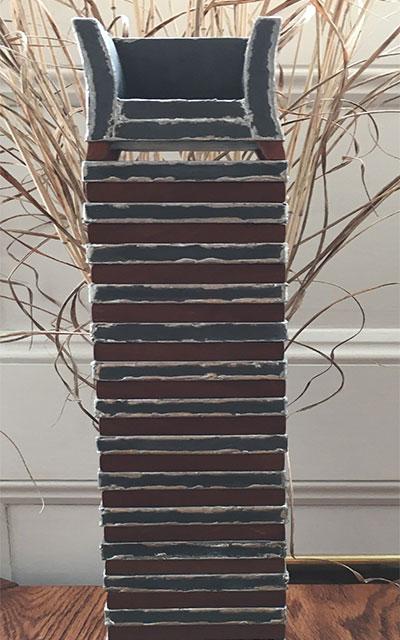 Lead and Mahogany Stack, close up 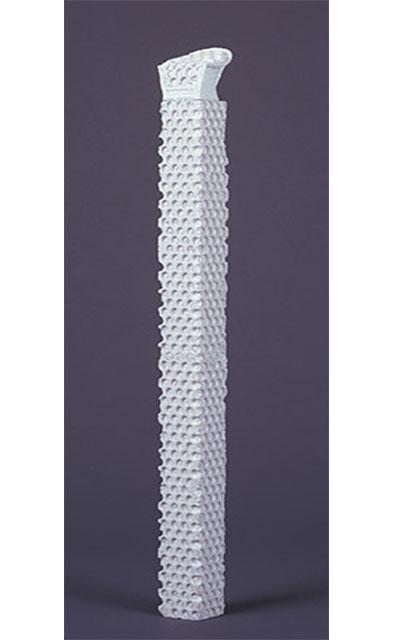 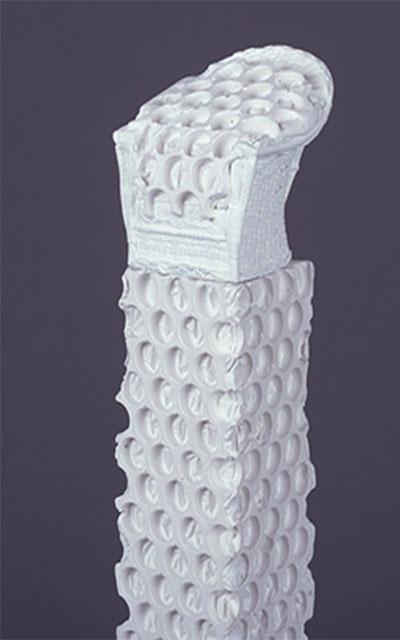 Bubble Stack for Kusama, close up 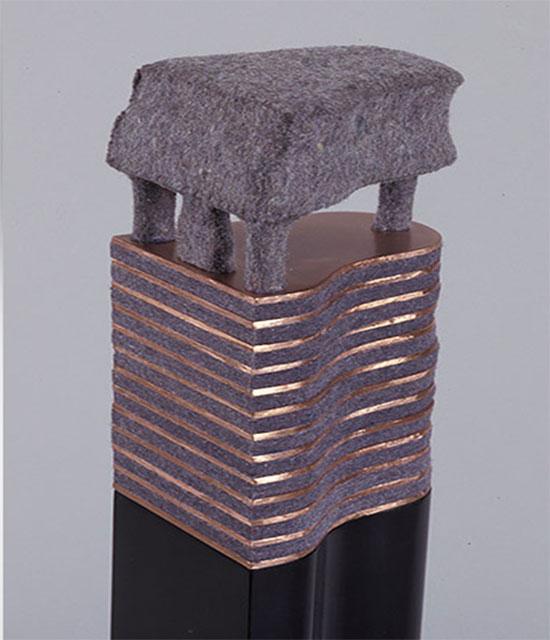 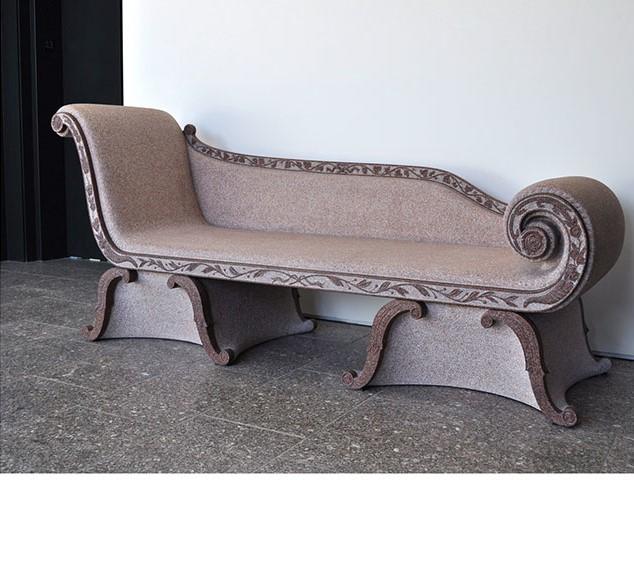